There is nothing important for parents than the health of their kids. In today’s world where there is pollution, chemical laden foods, veggies and other products everywhere, it becomes more important for us to take greater care of our future generation. Children, as is known, are prone to allergies and other diseases due to their “still-not-fully-developed-immune-system.” Parents, thus, are always worried about how to protect their kids from cold, cough, respiratory diseases and the like. Boosting their immunity and helping their proper physical, mental and psychological growth is the wholesome way to make kids stronger and healthier. Ayurveda, the ancient Indian medicine system, talks about every aspect of a child’s health- right from conception to natural ways of building immunity to even vaccinations in form of certain Ayurvedic tonics! Let’s see what are the major Ayurvedic ways to increase immunity in kids.

Ayurveda lays utmost importance to prenatal care along with post natal care. Kaumarbhratya, one of the eight branches of Ayurveda, deals with pre-natal and post-natal care of mother and child. This can be called Paediatrics, in fact, advanced paediatrics of Ayurveda. It starts taking care of child even before it has been conceived- sounds very scientific, isn’t it!

Ayurveda says that both the parents should have sound health before they plan to conceive a baby as it goes a long way to determine the health of their unborn! Not only should both of them take care of their health and hygiene but also of their mind and spirit by inculcating ‘Sattva Guna’ (Positive Qualities) in themselves. After conceiving, the role of the mother assumes greater responsibility. She should be physically and emotionally stable so that she can give birth to a healthy child. Mother’s greater responsibility doesn’t diminish the roles of father and other family members though. All the people surrounding the expecting mother have the duty of keeping her happy. The diet of a pregnant woman has been given great importance because this is what lays the foundation of her child’s health. In short, everything an expecting mother tastes, sees, touches, hears, and smells should be nourishing to her and her child!

Expecting Mother’s Diet is the First Step towards Healthy Society

Ayurveda insists on ‘Sattvic Food’ to be served to an expecting mother. Sattvic food is that which is pure and easily digestible. These include milk, ghee (clarified butter), fresh vegetables, beans, yogurt, fruits, nuts, grains like rice and wheat. It is considered that ‘Sattvic Food’ also leads to clarity of thought and perception. This type of diet promotes the feeling of love, compassion and contentment in an individual. These are positive feelings and even our own good modern science has faith in them when it says that these feelings are very important for overall health and even immunity from a lots of diseases.

Once the child takes birth, it gets a different body than it’s mother’s! It is no longer in the safe and protective environment of the mother’s womb. Now it becomes important to develop the immunity of the child so that it can fight with the many hazards of the outer environment.

Ayurveda lays important on internal as well as external ways to increase immunity in children. While there are Ayurvedic tonics and preparations for internal immunity, there are such means as massage that is important for stronger bones and muscles.

Kashyap Samhita, the ancient scripture of India, mentions ‘Snehana’ or oil massage as one of the best natural ways to build immunity in children. Massage not only improves immunity in kids but also increases their vitality. Apart from being delicate, the skin of infants is more permeable than that of adults. This is why when baby’s skin is massaged with hrebal oil, especially the ‘Bala Taila’ (medicated oil having the herb Sida Cordifolia), the beneficial components of the herbs go deep into their skin to make them healthy. Ayurveda also suggests giving giving ghee (clarified butter) and honey to the infants for the first four days of their life. These things are excellent for their mental capacity like they get good memory and retention power along with general vitality.

When Ayurveda as a medical practice was prevalent, there was no theory of vaccinations. The Ayurvedic texts, however, talk about certain solutions made with herbs to be given to the children in order to strengthen their bodies to fight against diseases. These herbal solutions for kids can be called Ayurvedic tonics to build immunity in children. They not only develop chidren’s resistance power against diseases but also improve their intelligence and help them acquire new skills at a faster rate. However, if you decide to give your kids such ayurvedic tonics, you should always consult an Ayurvedic doctor before doing so.

A paste of two herbs, Brahmi (Centella asiatica) and Sankhapuspi (Convolvulus pluricaulis) is made. Swarna Bhasma (Gold powder) is added to this herbal paste. Then this herbal mixture is administered to children, especially the new born babies, with ghee (clarified butter) and honey. Ayurveda says this is a good medicine for general immunity and intelligence of kids.

Mixture of ten herbs with honey

The powder of the following ten herbs is mixed and given to kids with honey. It is believed to defend kids from infections of chest such as cold, cough and even asthma.

Ashwagandha with ghee and milk

Ghee, popularly known as clarified butter, is obtained from cow’s milk. Although any milk can be used to make ghee, Ayurveda places special emphasis on ghee made with cow’s milk due to its fine properties and easy-to-digest nature. A patse made with the herb ashwagandha (Withania somnifra) is given to kids with ghee and milk. This is meant to provide wholesome nutrition and strength to children.

Triphala means ‘Three Fruits’ (Tri means three and Phala means fruit). Triphala is a mixture of three powders obtained from three herbs- Haritaki, Amalaki and Bibhitaki. It is given to kids with honey. The herbs in triphala helps children promote the number of red blood cells as well as improve their apetite and digestion. This churna or powder is excellent in building resistance of kids against common cold and flu. However, Triphala churna should not be given to infants. it is meant for kids who are above the age of one year. 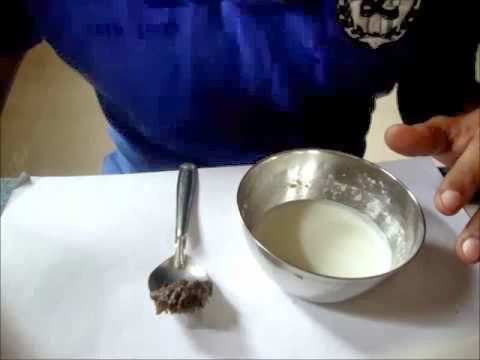 As discussed above, Ayurveda suggests many herbal preparations that can build and boost immunity of kids. Chyavanprash is a herbal Ayurvedic preparation which is generally meant for adults but can be given to children above the age of 5 years. It is believed that this Ayurvedic preparation was made by Chyavana Rishi (Saint Chyavana) and hence, it is named Chyawanprash. However, Acharya Charaka, the father of Ayurveda, was the first person to mention Chywanprash as herbal medicine. People consume chyawanprash as both, energy booster as well as immunity booster, generally in the winter months. The herbs used in Chyavanprash are loaded with anti-oxidant properties and as such help in strengthening body’s internal defense mechanism. It is particularly beneficial in protecting against common infections, cough, cold and stress related medical conditions.

There are many benefits of chyawanprash. Some of these are listed here but they are general benefits not specific to kids only.

So, have 1-2 tsp of chyawanprash with a glass of milk everyday in the morning. Better to have it before breakfast. Milk is essential to have with chywanprash because many herbs used in it have hot potency. Milk being cool, mitigates the hot effect. If you are lactose intolerant, have a glass of water in place of milk. This is about adults. When giving chyavanprash to kids, you need to be more careful.

How to give Chyawanprash to Kids?

Nowadays, many companies make chyavanprash for kids. These preparations are fortified with calcium, iron and milk proteins to help kids boost immunity. However, it is recommended that chyawanprash be given to kids only above the age of 5.

Use other Ayurvedic tonics discussed earlier in this article for building immunity of your children below the age of 5 years. However, it is strictly recommended to consult your doctor first because your kid may be allergic to some or the other ingredients.