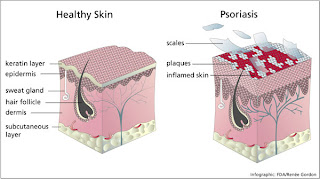 Psoriasis is a skin disease- a prolonged inflammation of skin. Psoriasis can begin at any age but generally starts either around the age of 20 or between 50 and 60 and affects both the genders. Psoriasis is not an infectious skin disease and it does not affect the general health.

Usually, skin cells go through a month-long life cycle. New skin cells are formed deep within the skin which replace the top skin cells over a period of about 28 to 30 days. The old dead skin cells are sloughed off by everyday routines such as showering and toweling off. In people suffering from psoriasis, however, the entire skin cell process happens in three or four days which causes a buildup of dead skin cells on the surface of the skin. This usually happens in patches, mostly on the scalp, lower back, elbows, knees, and knuckles. The technical term used for these dry, irritating, scaly patches is plaques.

Some medicines or skin irritants can also initiate psoriasis as also smoking and alcohol. According to Ayurveda, controlling natural urges is also one of the causes of psoriasis.

Although there is no complete treatment to get rid of psoriasis, one can help avoid it and let the body recover more quickly. The symptoms of psoriasis can be eased with some simple home remedies.

Olive Oil– For easing psoriasis outbreaks, add 2 tsp olive oil to a large glass of milk. Add this to bathwater. If having psoriasis on scalp, massage some warm olive oil on scaly patches there. This helps soften the dead skin and makes it easier to remove them.

Aloe Vera– .Aloe vera plant has great skin-soothing properties. split open an aloe vera leaf and apply its gel onto the plaques. One can even buy aloe vera gel available at pharmacies and health-food stores.

Baking Soda– Mix 1- 1/2 cups baking soda into 3 gallons water. Apply this to itchy patches with the help of a washcloth soaked in the solution. This relieves itching caused by psoriasis.

Epsom Salts– Add a handful of Epsom salts to bathwater. They keep swelling down and heal psoriasis.

Mineral Oil– Add some mineral oil to bathwater and soak the affected skin. Vegetable oil can also be used for the purpose.

Some researches state that vitamin D from sun rays are also one of the effective natural psoriasis treatments. Read Natural Psoriasis Treatment with Sunrays Vitamin D!

Psoriasis- Some Do’s and Don’ts

Minor lifestyle changes and food habits can help avoid psoriasis and problems related to it. Here are some do’s and don’ts for people suffering from psoriasis.