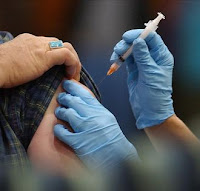 Swine flu pandemic has again hit many countries. The flu may not have hit India hard in its first wave, but in its second wave, it could be expected to be worse because winters is the ideal season for spreading flu virus. The sure shot way of fighting this new disease is vaccination.

What has India done for Getting Swine Flu Vaccine?
In July this year, the Indian Government granted licence to three pharmaceutical companies to manufacture swine flu vaccine. A committee has also been constituted to keep watch on the process of acquiring the seeds from WHO and manufacturing of vaccine. The committee is headed by the Director General of the Indian Council of Medical Reseasch, Dr. V M Katoch.
India had also initiated talks for import of this vaccine with the Swiss multinational Novartis which has developed the first swine flu vaccine in the world.
What is the Production Status of Swine Flu Vaccine?
Hyderabad-based Bharat Biotech, one among the three licensed pharmaceutical companies which will manufacture the swine flu vaccine, has already started their work on the vaccine. The company has taken strains of the virus from the Government of India, who in turn took it from the CDC (Center for Disease Control), Atlanta which is a federal agency of United States. However, the vaccine development may take six months to even five years to come into the market as told by Suchitra Ella, Joint Managing Director, Bharat Biotech International. Normal vaccine processing and its development clinical regulatory testing protocols have to be approved by the Ministry of Health, which is a very long procedure that cannot be cut short. Paper works and test trials on animals will also take a considerable period of time.
What is The Import Status of Swine Flu Vaccine?
In spite of several months of talks with Novartis, India did not reach any decision about importing swine flu vaccines from the multinational company. Meanwhile, Novartis is already full up with orders from the the US and European regulatory authorities. It has, in fact, started shipping the H1N1 pandemic vaccine to the first countries in October. According to Dr Andrin Oswald, CEO, Novartis Vaccines and Diagnostics, Basel, Switzerland, the company has requests from many other countries who have not ordered, including India. According to the company representatives, they will do the best possible to protect at least the high risk patients in India. However, this will take time since their production capacity has been sold out at least till March 2010. The company will have India as a high priority country to ship the vaccines as early as possible provided they manage to have additional production capacity. In any condition Novartis’ swine flu vaccine can not be delivered to the high risk groups before April 2010.
Sources: expressbuzz news and ndtv news
Prev Article Next Article