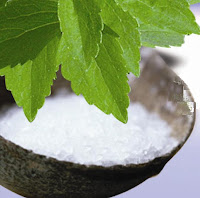 Stevia rebaudiana, also known as sweet leaf, sugarleaf, or simply stevia, is a South American shrub that grows in semi-arid regions, mainly of Brazil and Paraguay. This South American herb has been used for hundreds of years now, as a sweetener by the Guarani Indians of Paraguay, Bolivia and Brazil in medicinal teas for treating heartburn and other ailments. More recently, stevia has been accepted as a natural sweetener throughout South America and Asia. It is considered to be a safe, natural, and calorie-free sweetener. It has been widely used in Japan for over thirty years without any reports of harmful effects.
Properties of Stevia
Stevia has many properties par excellence. It is a calorie free substitute of sugar as well as as of aspartame, the artificial chemical sweetener. The sweet glycosides found in the stevia leaf, and also present in its processed forms, do not get metabolized by the body and so there is no caloric intake. As a result, it does not adversely affects blood glucose levels and may be used by diabetics without any health concerns.
Stevia extract is 300 times sweeter than sugar and it also mixes easily with foods or beverages. While many stevia extracts have a slightly bitter aftertaste reminiscent of licorice, a number of manufacturers of this herbal product claim to have figured out how to eliminate this.
A study published in the Journal of Agricultural and Food Chemistry has also found the extracts from the leaf of Stevia to be high in natural antioxidants that prevent the DNA damage which leads to cancer. The varieties of antioxidants found in Stevia leaves include apigenin, kaempferol and quercitrin.
Some medical researches have also shown possible benefits of stevia in treating obesity, hypertension and high blood pressure.
For all these benefits of Stevia, it is fast becoming attractive as a natural sweetener to diabetics and others who are on low-carb or carbohydrate-controlled diets.
Prev Article Next Article